The war launched by Russia on February 24th has been still going on in Ukraine. Infrastructure facilities are being damaged every day. The cost of damages that experts share changes daily. According to the Center for Economic Policy Research, after a month of the war, the total expenses for reconstruction will range from $220 bn to $540bn.

At the same time, the state, in coordination with international organizations, has already started working on so-called U24 reconstruction plan. According to the Prime Minister of Ukraine, Denys Shmyhal, it includes three stages.

Ukrainian businesses were impacted by the war drastically from the very beginning. Some companies put it on hold immediately and refocused on the social needs, the army, and the safety of their people. Some keep on working in new realities cutting personnel and expenses. According to the Gradus survey, 55% of Ukrainian businesses stopped their activity or decreased their operations to the minimum; 3% closed forever. 13% of companies worked adapting to new conditions. 18% of companies declared they had no resources to pay employees.

Using Kyiv, as an example, once the opportunity comes, specifically low risk of hostilities, the business is ready to back to work immediately. A promising sign for them might be the reopening of embassies in the capital. At least 17 states have already returned their diplomats to Kyiv.

The construction sector will be among the most important for the country’s rebuilding. According to Managing Director of UkraineInvest Sergiy Tsikvach, international investors from the construction, construction waste, and service sectors are interested in entering the market once the war ends.

Large local investors also admit they have been focusing on the property sector. A founder of UFuture, Vasyl Khmelnytsky, believes that the critical driver of Ukraine’s economy will become industrial parks which ensure local business with fast and safe relocation within the country. Such projects will provide an opportunity to renew work and offer more jobs to the local people.

CEO of Dragon Capital Tomas Fiala also shares this position declaring during his interview with Forbes about the company’s plans to develop the industrial park in Lviv after the war. He also believes that shopping malls and warehouses will recover fast while the office sector will face the post-war effect longer.

Social responsibility and unity around the country’s interests are part of Ukrainian business as well.

According to United Nations’ refugee agency, over five million people fled Ukraine from the beginning of the invasion. Over six million Ukrainian have relocated from the country to safer places. Thousands of people have their houses destroyed or damaged.

The construction of new residential projects is an urgent question and will remain such for a longer time.

Thus, Fiala says that the company is considering the launch of social projects, specifically residential development in the Western part of Ukraine for people who lost their homes or left the country.

“Local authorities help us to find owners of incomplete constructions. We want to buy them, finish the construction, make ready-to-move-in apartments and lease them to people under favorable conditions. We have identified around 1000 such apartments and now are looking for co-investors.”– says Fiala.

Similar projects are provided by other entrepreneurs as well. CEO of Concorde Capital Ihor Mazepa told Forbes that the company had placed 120 orphan kids in their private countryside neighborhood Shelest turning it into an orphanage. Part of the expenses is beard by the investor, part by international charity funds.

Mazepa also attracted international charity funds such as Direct Relief International, Children of War Foundation, and University of Miami Global Institute to support the chain of clinics Dobrobut, which were closed after the launch of the war. Today they started to reopen. Without the support of funds, the clinics would not be able to operate. Now the situation is different. The company launched free healthcare services for residents of Irpin, Bucha, and Hostomel. It also opens new branches beyond Kyiv and Kyiv regions, mainly in Lviv and Ivano-Frankivsk, with further plans to scale around Ukraine.

Developers expect that the industry will require several years to bounce back. But it depends on the specific sector and region. While the western part of Ukraine will reach the before-war level faster, most damaged regions in the East should be totally rebuilt from the scratch. At the same time, Ukraine still needs to win the war first, which requires vast international military aid, unprecedented sanctions for aggressors, and according to Shmyhal at least $5 billion per month to support the country’s economy.

The construction of new residential projects

is an urgent question and will remain such for a longer time. 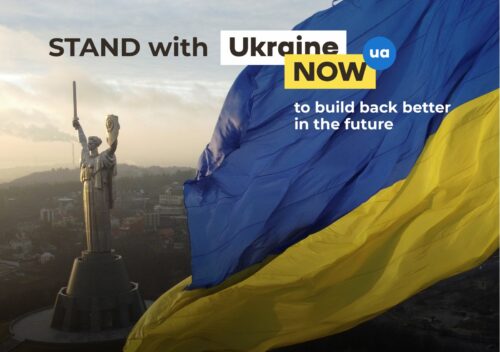 Here is what you can do to support the country –

As Europe Struggles, Ukraine’s Economy Heads for an Upswing – Bloomberg

National Bank of Ukraine cancelled the limit for dividends repatriation

Business Environment investments
News subscription
Right communication means right decisions.
Only relevant and important materials in your mailbox.
I give a consent to my personal data processing
Eng